Software transaction volume has remained consistent in Q1 2011 from Q4 2010, while value dropped 30%, a decline which can be attributed to the lack of multiple billion dollar transactions during the quarter, which have historically bolstered the industry’s aggregate transaction value. 2010 saw over 10 transactions valued at more than $1 billion, while Q1 2011 had only eBay, Inc.’s purchase of GSI Commerce, for $2.14 billion,the largest transaction of the quarter.

The Business Software segment was well represented this quarter by Salesforce.com Inc.’s $308 million acquisition of Radian6, a solution to monitor social networks. 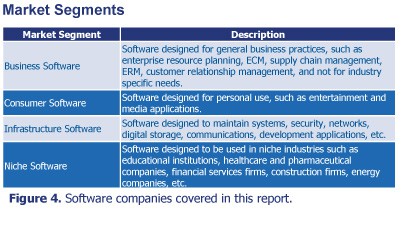